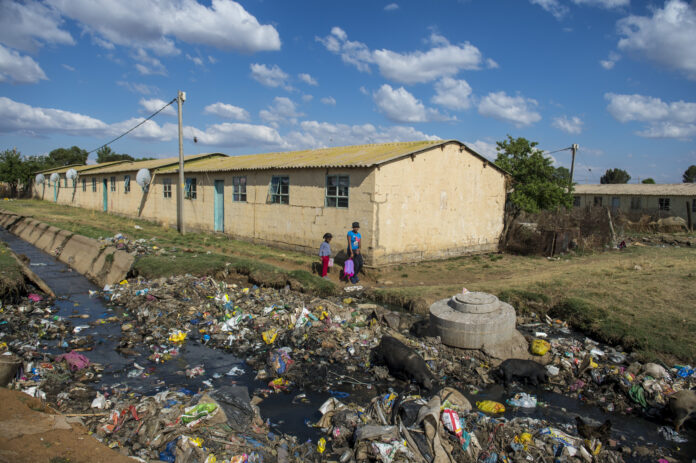 Clutching her one-year-old son, Monica Ndakisa jumps onto a brick to avoid the sewage that runs like a dark stain across the passage in her home.

“We’ve lived like this for years,” she says pointing to one of the culprits: her blocked toilet, which causes sewage to pool into nearly every room of her home in Sebokeng hostel in the Vaal. “The smell is too terrible.”

It’s worse outside. Her small garden is submerged in a sickly, grey sewage swamp. To stop the human waste from seeping inside, Ndakisa has built a concrete barrier at her front door. But it’s futile.

“My five-year-old son was in the hospital for two weeks with severe eczema and they told me it’s because of all this sewage. It makes us cough all the time. It’s so depressing to live like this.”

Samson Mokoena, of the Vaal Environmental Justice Alliance (Veja), shakes his head. “It’s chaos. You can’t allow people to live in such conditions. The government is playing with our people.”

Ndakisa’s neighbour, Maphelo Apleni, has used pipes to divert the stream of sewage from his garden. “It never stops,” he says grimly. “We have a municipality [Emfuleni] that doesn’t care about us.”

Mziwekaya Mokwana points at a sewage-filled furrow clogged with litter where pigs are feeding. “This is no better life,” he says. “People are the same as pigs here.”

Last month, the human settlements, water and sanitation department said it would take at least another three years to minimise and eventually stop the sewage flowing into the Vaal River system.

In a recent presentation, it states how “design treatment capacity is at its limit, housing development investments are delayed and there are negative environmental and health impacts”. Ageing infrastructure is to blame for sewage spillages, coupled “with a lack of operation and maintenance investment” as well as theft and vandalism.

It will cost about R2.2-billion “to have a sustainable impact on the Vaal River catchment within Emfuleni local municipality”.

But Maureen Stewart, the vice-chairperson of Save the Vaal (Save) is sceptical. She says there is no political will to tackle the crisis. “These problems go back over 12 yearsand reached crisis proportions when the system collapsed in 2018. The result is some 200 million litres of raw or partially treated sewage entering the Vaal River and its tributaries daily.”

Stewart warns that it’s an ecological disaster that also affects agriculture and has serious health implications for people living above and below the Vaal Barrage Reservoir, which is 64km long and used to supply Johannesburg with water but is now too polluted to do so.

She says the Emfuleni municipality has been under Gauteng’s administration since mid-2018 and, despite promises, the status quo remains — unbridled sewage pollution of the Vaal River and Emfuleni.

“The Ekurhuleni Water Care Company (Erwat) was appointed to take over in 2019 and were given funding and spent R179-million. Their contribution was to unblock pipes and remove 50 tons of rubbish from the system. This opened the pipes but, as the pump stations and the three wastewater treatment plants remain dysfunctional, there has been no improvement. Raw sewage continues to flow into the Vaal River and into the streets of Emfuleni.” 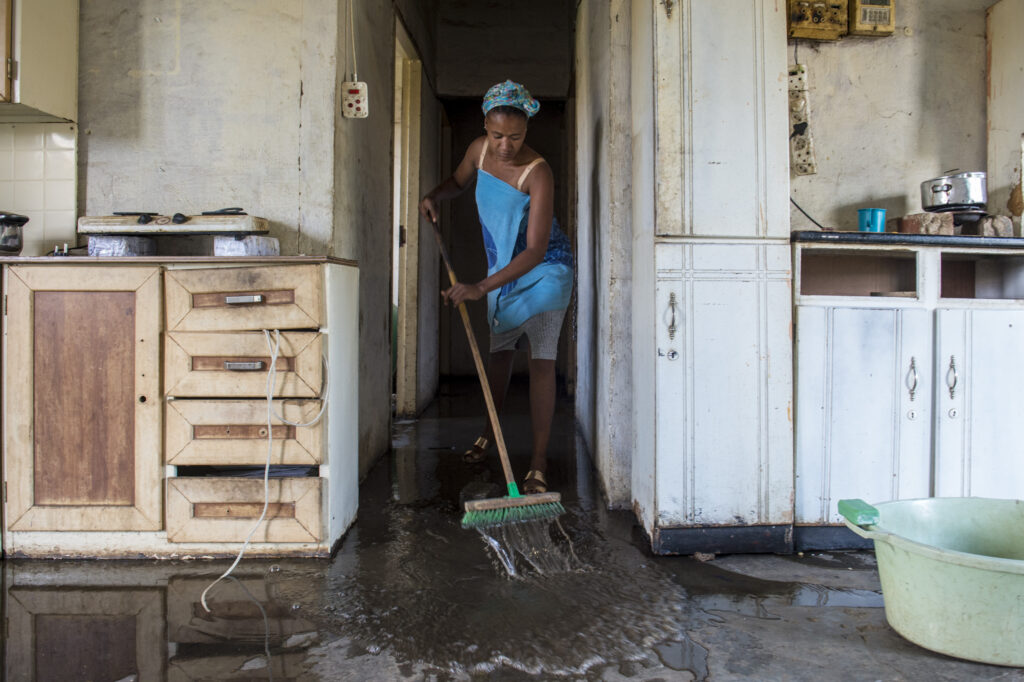 There was a “glimmer of hope” when Minister, Lindiwe Sisulu, visited the Vaal in January this year, assuring Save that action will be taken and that funds are earmarked in the 2020-2021 budget.

“It seems her enthusiasm has not filtered down to her department,” says Stewart. “After Erwat’s contract was not renewed, the department stated they would undertake the repairs by appointing their own contractors. Tender documents have been languishing on someone’s desk at the department since July.”

Sputnik Ratau, spokesperson for the department, says the government has committed resources towards solving the sewage problem in the Vaal.

“Government sent state institutions to assist Emfuleni local municipality (ELM) in this regard; these include SANDF and Erwat. Recently, the department finalised the scope of all that needs to be done to solve the sewage problem. There are 26 work packages that will be advertised in the coming weeks for competent contractors to take part in solving the sewage challenge in the Vaal.” 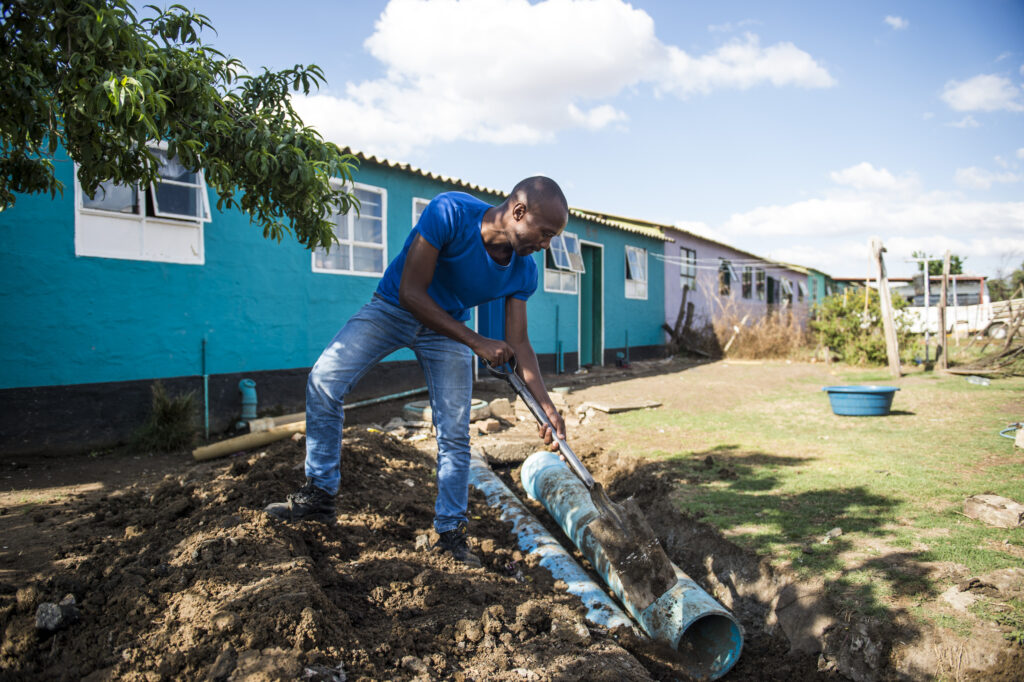 Maphelo Apleni installs pipes to drain sewage out of his garden.

Before the end of the financial year Module 6 in Sebokeng water care works will be launched, “subject to no community unrest disrupting construction”.

The department, Ratau says, has to take all necessary precautions to ensure that section 217 of the constitution is followed as far as procurement is concerned.

“Thus the departmental checks and balances had to be followed to the letter to ensure compliance with procurement processes. This unfortunately caused delays but was necessary.”

Within the next month the department aims to advertise for all the contractors “that can assist in this challenge”.

Ratau says commitment dates, including start and completion dates, “will be sent not only to Save but all interested stakeholders once the contractors are appointed. The department cannot preempt this before the appointments are made.”

He says that R7-billion is required to “solve the pollution challenge in ELM. This needs to be coupled with operations and maintenance, which is a function of ELM at local government level”.

Save is once again taking the government to court to enforce legislation to ensure infrastructure is repaired within phased completion dates and that sufficient funds are made available for ongoing maintenance and operation of the system by the municipality, supervised by the high court.

Veja’s Mokoena is glad the department is taking over the Vaal clean-up. “This situation was supposed to be fixed a long time ago. So much money has been squandered at the municipal level.”

Eight months. That’s how long it took Rand Water to release public water quality records for the Vaal Barrage system to a team of aquatic specialists investigating the ecological health of the river system.

In January, Aquatic Ecosystems of Africa submitted a Promotion of Access to Information Act (Paia) application to Rand Water for access to its water quality analysis data for the Vaal Barrage and downstream since 2015. 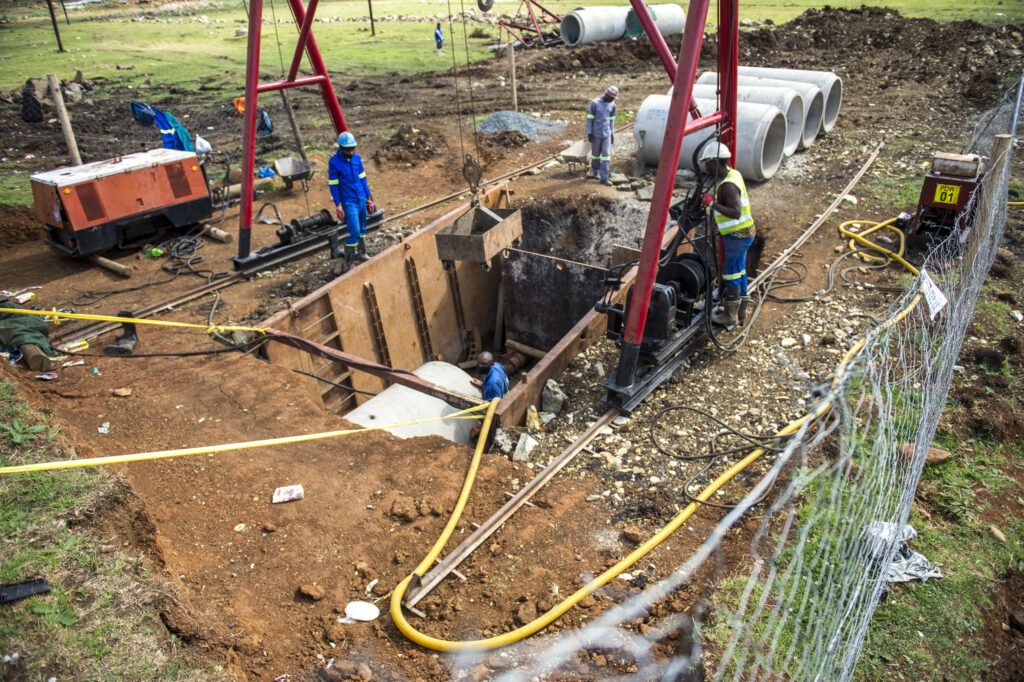 New pipelines are being installed in the Vaal.

In an email to Rand Water, Sebulela noted how the multiple requests for records by Aquatic Ecosystems and the Federation for a Sustainable Environment have allegedly been ignored, which in terms of Paia are deemed refusals.

“The SAHRC is greatly concerned by a large number of public institutions who provide such important services to the public who refuse to meet their basic legislative obligations,” he wrote.

The records landed in the firm’s inbox on 2 October.

Rand Water did not explain the reason behind the delay.

That the information was provided in a PDF format of almost 2 000 pages “frustrates and delays” its interpretation, says Liefferink.

She and her partner, Russell Tate, began their investigation after a major fish kill in the Vaal River in mid-2018. That September they testified at the HRC’s inquiry into the contamination of the Vaal River that high levels of ammonia from the wastewater treatment works was wiping out life in the river system.

“The contributing factor is clear — dysfunctional sewage treatment conveyances and treatment plants. More disturbing is the long-standing deterioration of the system that ever increases the loss of biodiversity and other essential ecological functions and human services. Yet this matter is still not treated with extreme urgency,” says Liefferink.

It’s taken nearly two years for the Human Rights Commission to release its report into the Emfuleni sewage crisis. “Their report has not yet been taken to parliament, nor has it been published. Why?” asks Save’s Stewart.

Buang Jones, the Gauteng manager of the HRC, says the provincial report has been finalised.

“It’s with the commissioners now for final adoption and approval. Once it’s been approved, it will be shared with implicated parties and they’ll have 10 days to comment. This is a countrywide issue and the report seeks to address broader challenges when it comes to river pollution and wastewater management,” he says.

More in this category: « POLLUTION OF THE VAAL RIVER INTERVENTION AS PRESENTED at Rietspruit Forum - Aug 2020 UNPACKING THE LATEST DEVELOPMENTS IN WATER »
back to top

FSE in the press